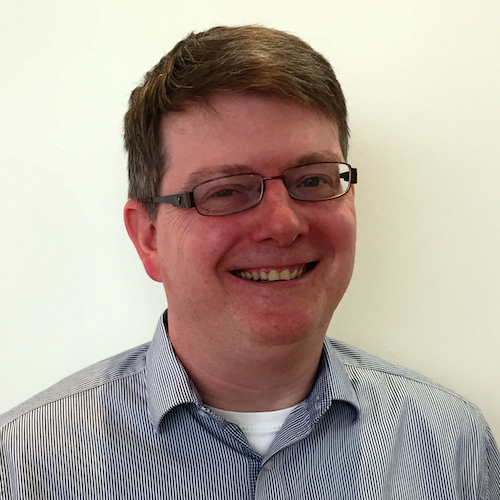 KRISTINA PODNAR, HOST: Hello everyone and welcome to the power of digital policy podcast. Thank you for joining us today. I'm excited to have with us James Baverstock, who I've known and worked with in the past. James is a senior accessibility consultant at AbilityNet, which is a UK accessibility charity, where he delivers accessibility audits, user testing, and client training for companies such as Barclays, HSBC, and BT. He's previously worked as a public sector website manager where accessibility was a major focus, and also has experience working for a company providing automated accessibility testing. James, welcome to the podcast.

Thanks for making time today to share your expertise.

JAMES BAVERSTOCK: Thanks very much for that intro Kristina. It's great to be here.

KRISTINA: Honestly, I am so excited because I've worked with you before so I know how awesome you are. But I also have heard other people praise you along the lines of accessibility. You're truly a subject matter expert in the field. And so, I'm wondering James, when we think about accessibility. It's such a challenging concept for many organizations to grasp. Especially small to medium ones that don't have dedicated resources. What are some of the Practical things that organization can do as an initial step to accessibility?

JAMES: It is a complex topic because there's both the kind of the technical side to it. And there's also the side of understanding about people with disabilities and the way in which they use assistive technology and the sort of people side to it. So, it's  something where initially it's helpful if potentially you can have somebody within the organization to be and that to be an accessibility champion and to get a get a greater knowledge about accessibility.

Potentially, initially maybe to get training to maybe bring in somebody externally an external consultant to start with and then look at training it look at getting some sort of basic training internally. It's not something where everybody needs to know everything about accessibility immediately. It's more that it's something where you need a sort of a good basic knowledge spread across people. You want your designers, your product managers, your developers, your QA people to have at least a basic idea of accessibility.

Then you might have particular people within the teams who want to become accessibility champions and be your internal go-to people while at the same time making sure that you have that you have a you have a spread of knowledge as well.

KRISTINA: So, it sounds like awareness is the first step.

JAMES:I think so. So, first of all, just getting that level of awareness. It's surprising that you can sometimes go into organizations and you can talk to people who really don't know what accessibility is at all. So, getting that that first level, that you sort of introduce people to the concept and familiarize them with that. And then you can work towards a greater level of understanding as you go along.

KRISTINA: That's interesting because I hear a lot of organizations sort of express that they're fearful or they're afraid especially around how much time they're going to have to dedicate to accessibility. So, can you talk a little bit about, you know, if you're going to take your that initial step get into the awareness mode, start to find your champion and train people once you do those things how much time and effort do you anticipate organizations need to dedicate to ensuring accessibility remains a priority and that is integrated into everyday practice?

JAMES: It certainly does take time, commitment and resources, but it's something where if you can integrate it into your everyday practices, so it's part of what you do in terms of your development, your design, your QA if it's something that's considered along with your other priorities, then it will be it will be easier. I think we're accessibility can get a bad reputation, is where people tend to first encounter it is where there's some sort of complaint or they do an accessibility audit after they’ve just finished a website redesign or a project and then they get the big report back saying that they've got all of these dozens and dozens of accessibility issues. And if that that's part of I think what makes it what makes it daunting.

It's very difficult for organizations to get into that sort of place because it requires commitment from the top. It requires having the right sort of policy and the right the right procedures in place. And it requires that level of awareness that I was talking about across teams. But if you can get into that place, it does become easier and combining that potentially with the use of automated tools can help to an extent. Combining that with making sure that it's baked into your QA processes. Making it part of the way that you do things. If an organization can get to that stage then accessibility does become an easier thing to deal with.

KRISTINA: That's great. It sounds like something that we've just all need to learn and adopt. And so I'm curious, you know, we're talking a lot about websites and website accessibility, but we live in a world of mobile devices, social media, internet of things and devices. Will we actually get to the point where accessibility practices evolve across all of these channels? And how do you see that kind of playing out in the marketplace? Are people thinking about accessibility beyond websites or are we still at initial stages where websites is sort of the ground zero and we're still working on that?

JAMES: I think it's already the case that, I mean, there's certainly in terms of in terms of apps. I think a lot of people are putting a lot of effort into app accessibility. We certainly do a lot of auditing and work in terms of testing mobile apps. And obviously they have a different sort of ecosystems as websites, but a lot of the same principles apply.

And the web content accessibility guidelines, the kind of the international guidelines that people follow I'll written to be technology agnostic. So you can go into you can look at different systems and potentially you can apply you a lot of them across different types of technology, in different types of systems. So, it's not a question of sort of starting from scratch every time there's a new development, but there are do tend to be things that over time need to change.

KRISTINA: It's great to understand that because I think people think that every single time we either release a new app, or we decide to test out YouTube or some other social media channel, that we're going to have to start from scratch. It's good to understand that this is an evolving foundational step that you take, and then you can layer on but with the same concepts, but with the same resources and the same principles that are already out there.

I'm wondering James, the Internet is full of advice. You just mentioned the guidelines themselves, but the devices and advice out there in terms of testing accessibility, in terms of understanding what we ought to do. Some are great some are less. So what are your three go to resources for accessibility that you want listeners to access and bookmark and keep handy?

JAMES: That's  a tough one. I'm trying to think of the things I find most useful. I mean a weekly newsletter I find really useful is the A11y Weekly Newsletter. So that’s Ally with a 11y weekly. That's a newsletter that comes out every week and that's really good selection of resources generally. Also, it has each week at least one resource for people who are entirely new to accessibility. So even if you're someone who's just starting that's potentially something which is which is really useful.

I think some of the forums are great, and WebAIM generally is a great site which has loads of useful information for things like screen reader testing, especially beginning screen reader testing. WebAIM also have a forum, which you can search individually, and that's that that tends to be a really useful resource. And in terms of a paid-for resource, an organization that I'm a part of is the International Association of Accessibility Professionals (IAAP). They again have a forum if you’re a member that you can ask questions on and that's quite useful. And they also have a wide range of webinars. They have a webinar every month. And if you're a member you can get access to the old webinars. That's quite a useful organization. They also have qualifications. Their foundational qualification is the it's called the CPAC and that's quite useful if an organization is thinking about wanting to get people aware a basic sort of accessibility within the organization.

It's worth thinking about If you have people and you want them to be an accessibility champion, to get them that CPAP qualification. It gives you a very good grounding in not just the basics of the technical side, but what assistive technology is used, what disabilities there are, and that sort of side which is the core foundation. As I've said, technology can change, but if you have a good understanding about how people with disabilities use technology, and how disabilities affect people, that gives you a really good foundational knowledge be going on with.

KRISTINA: Thanks, and I'll make a point of listing all of those resources on our site just so that people can easily access them. As you were talking James, I was thinking about those resources. First of all, thank you, because those are great. Especially the foundational pieces for folks who are starting out. I'm wondering about the fact that you know, a lot of people want to do the right thing. They want to make content accessible to everybody, but they might just not have time. So, if listeners are out there and they really believed in accessibility, they want to get started on this past path, but they don't actually have the resources internally to do that. Can you tell us a little bit more about AbilityNet and how people can reach out to you and what they can do sort of as an initial step?

JAMES: Yes, certainly. On AbilityNet, on our website, we do run regular webinars. And again, you can go onto the site and you can see webinars that have been done in the past. And if you're just getting interested in accessibility, some of those webinars have really great information in them. As well as articles and blog posts on the site. And again, we've also got a weekly newsletter that you can sign up for. So those are all potential initial resources that you could get on the AbilityNet site.

AbilityNet also has consultancy available, paid for consultancy for companies, to look into your websites or apps or applications, and we also provide training and so on. So those are all things potentially if you're interested in, that you could you could approach AbilityNet. But initially have a look at the website and have a look at the resources that are available there. There's lots there about the different things that we do as well.

KRISTINA: Perfect. Well, that's great. I have personally worked with AbilityNet, with you James at AbilityNet, and had really great client feedback in terms of how practical and useful the testing that you've done has been. So, it's wonderful, if folks need that kind of help to be able to have that.

JAMES: Thanks very much.

You can reply to this podcast here: